WordPress.com is excited to announce our newest offering: a course just for beginning bloggers where you’ll learn everything you need to know about blogging from the most trusted experts in the industry. We have helped millions of blogs get up and running, we know what works, and we want you to to know everything we know. This course provides all the fundamental skills and inspiration you need to get your blog started, an interactive community forum, and content updated annually.

Artists participating in this year’s exhibition of Chinese culture are: Ms. Sally Feng, she is a professional painter. She now served as Asia Art Association’s New York Chapter President. Her painting style into something cultural and artistic elements, and actively participate in the exchange and the promotion of Chinese and Western art. Andrew YiXiong Gu, he graduated from Xi’an University of Arts and Science Department of Art, he likes to study philosophy, religion and good Zen Ink. He is an art teacher New York Golden Eagle Institute, and President of the World Buddhist Art Center.

Ms. Altina Vergada, interior designer. She was previously president of the New York Long Island Painting and Calligraphy Association. She is passionate about Chinese ink painting, uninterrupted decades and created many outstanding works.

Mr. Tim Huang, calligrapher. He is vice president of the North American Association of calligraphy works incorporated into the “China’s elite talent ceremony."

Ms. Gladys Stewart, she is a doctoral student of ecology. She fell in love with Chinese ink painting by chance. She is a member of the New York Long Island Painting and Calligraphy Association.

Currently, He is the President of World Zen Art Center, co-director of China Zen Art Academy.
In 2003 he went to Japan to take part in a culture exchange sponsored by the Japan China Cultural Association. While in Japan his art works were collected by Japanese friends and received good evaluations. Next, he went to Beijing People’ Hall to participate in the “China Soul-Celebration of the 56th Anniversary of the Establishment of People’s Republic of China, Calligraphy and Paintings of Celebrities National Celebration Benevolent of China.” China Art Weekly featured and introduced Gu YiXing’s paintings.

In 2005 he won the Gold Medal at the China-America ,San Francisco ,Chinese Painting and Calligraphy International Contest. He then received several other awards in China. At the Beijing People’s Hall, he received the name of the “Ten Best Moral & Art Model“ from the Moral Model Meeting of China Organizing Committee. He also received from the Traditional Culture Promoting Project of China, the award of “Traditional Culture Promoting Project of China Outstanding Award.” In 2008, China Cultural Information Association and China Cultural United Publishing Company awarded him the name of “Master of the Time”.
Mr. Gu moved to the U.S. in 2009 to actualize his dream that of the development and prosperity of Zen Art and Chinese brush painting to grow worldwide. He specializes in Chinese ink landscape and Zen brush paintings. His ambition and life goal is to establish an international Zen Art development to ensure Zen Art’s prosperity and appreciation for generations to come.

Zen is a Chinese Zen Buddhist Dharma, essential school. With Zen methods and practice a high degree of unity between man and nature can be reached. By learning Zen you can eliminate troubles by using it to predict the reasonably foreseeable future. Ones conscious mind can go travel the Universe (humans do not understand about other worlds)

To accomplish Chinese Zen calligraphy and ink painting the artist must enter the Zen state by meditating first. The painting is an experience and expression of Zen and it's effect on people makes them appreciate the work, it makes people's mind clear, makes them feel good, simple, and even may give rise to self-reflection to rethink life skills approach and attitude.

I will use my life to pursue the art of Zen ideals, with my practice to bring you joy and pleasure. Let everyone experience the fun of the wonderful art of Zen. I aspire to move forward and influence the prosperity and development of Chinese Zen painting and provide for the opportunity for all countries to learn and appreciate this ancient art.

Around AD 520, during the period of the Southern Dynasties and during the reign of Emperor Liang. India’s Bodhi Bodhidharma came to China and Zen Buddhism began in China. The Chinese people integrated their own culture and thought with Buddhism. The ideas of Chinese Zen culture, have had a profound impact on Chinese culture and art. Zen became popular, the most famous Zen masters were Master Hakuin and Master Suzuki Zen. From their schools and training Zen art spread to the West. With this movement, Buddhism has become better understood around the world and Zen Art has become a world art. Zen art is the work of art both in a Buddhist monastery by a monk painter and by a painter, works of art produced in the meditative state. The realm of these general works includes the empty static of innocence; simplicity, straightforwardness; fun days, impressionistic feelings; inspiration and thought. Other characteristics of the art may be annoyance in original life and pressure which produces abandon or frank thinking; people physically and mentally clean and pleasant showing no trouble in facing life.

After Zen was introduced into Japan in the year of 1192, it developed and grew into Japanese Zen. Japanese Zen quickly penetrated into various aspects of the Japanese culture and produced the formation of a nation of Zen Buddhism worship. Gradually, Japanese Zen painting began and became popular, the most famous Zen masters were Master Hakuin and Master Suzuki Zen. From their schools and training Zen art spread to the World. With this movement, Buddhism has become better understood around the world and Zen Art has become a world art.

Mr. Gu specializes in Chinese ink landscape and Zen paintings. His ambition and life goal is to establish an international Zen Art development to ensure Zen Art's prosperity and appreciation for generations to come.

I am the son of the Yellow River,
Yellow nurture my soul,
It taught me to go beyond the self,
I reach the highest artistic life situation;
I suddenly enlightened,
I look back I thought,
Half the time of my life has been like smoke drifting away.
I now see is colorful Buddha, bright and splendid!
Like fairyland,
Charmed carefree! Fantastic.
- July 22, 2002 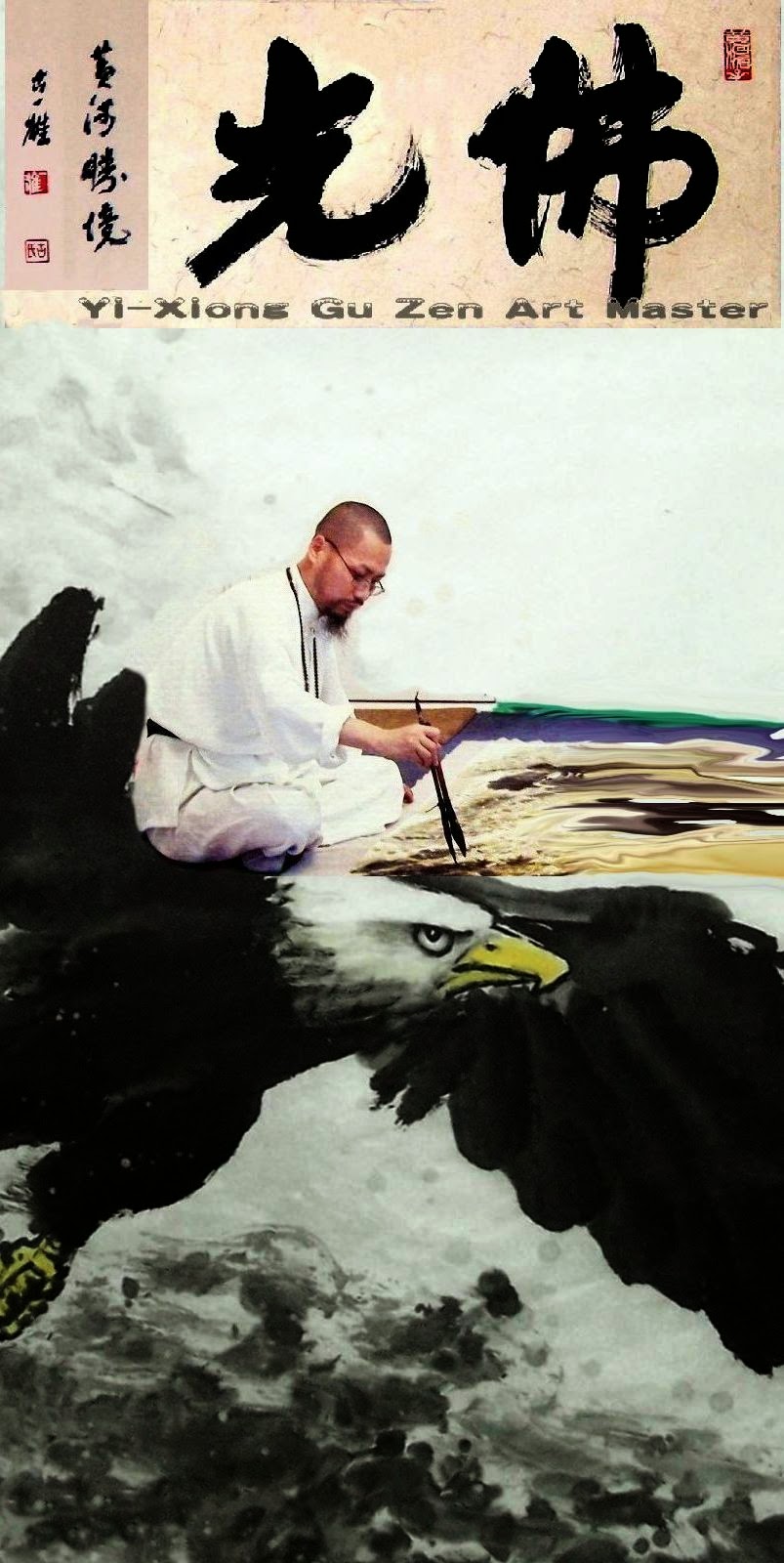